We’re ready to put a long winter behind us, but we also want to harness some of that cold air for the dog days of summer. For many people, air conditioning is the beginning and end of the story. But air conditioning is just one of the ways that you and your family can keep cool this summer.

The real key for keeping cool is to keep air moving throughout your home. Here’s how to keep cool this summer: easy tips for everyone to try.

Even if a new air conditioner isn’t in your budget, there are steps you can take to improve your current model’s performance. 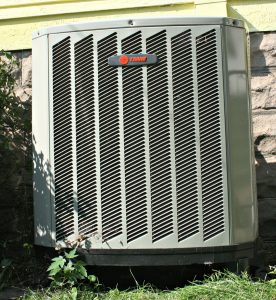 One painless step is to raise your thermostat’s temperature during the day. Why pay to cool the air if no one is at home? Just a two degree increase can save big money each year.

You can do this manually, or install a programmable thermostat. There are many models available, from a basic digital timer to advanced “learning” thermostats that adapt to the way you live in your home.

If you’re not sure where to begin, a certified home performance professional can help you rate your home’s energy efficiency and find the best deals for your wallet and your home. They can help you determine the right size and model air conditioner for you and your home, take advantage of rebates and incentive programs, and make sure your home is performing at its peak.

Upgrading your home’s windows and doors with newer products can increase your home energy efficiency, and make your family more comfortable year round. But what products are right for your home?

When a professional replaces your windows and doors he will also replace the air sealing around the frames, helping to keep your energy costs down and your comfort level up.

Are upgraded windows and doors the right choice for you? Get your home’s full energy assessment today: it’s fast and accurate and will give you actionable information to take the next step. Click here to use your assessment data and save even more time.

Air sealing is one of the most important – and effective – steps you can take to make your home more energy efficient. One easy do it yourself project is air sealing with caulk.

Caulk is a flexible sealant applied over joints and gaps in your home: between your shower and the floor, for example, or between the window frame and the window. When you seal these spaces you keep air from leaking outside your home, and your HVAC system doesn’t have to work as hard to keep your rooms at a comfortable temperature.

Is air sealing with caulk the right choice for you?

Have you ever noticed a draft in your house, especially around the windows and doors, or the baseboards? These drafts are caused by air moving from one part of your home to another. That means your heated or cooled air is leaking out, costing you money on your energy bills every month. How can you stop air leakage?

Air sealing is one of the most effective home improvement projects for increasing your home’s energy efficiency, and making your family healthier and more comfortable. 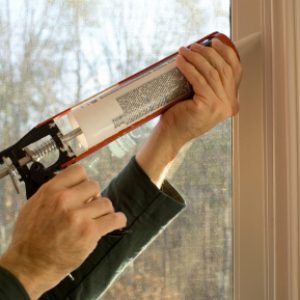 Reducing air leakage between the inside and outside of your home will keep warm air inside in the winter, and cool air in during the summer. Effective air sealing may also keep moisture, insects, and pests from invading your home. When you seal these spaces you keep air from leaking outside your home, and your HVAC system doesn’t have to work as hard to keep your rooms at a comfortable temperature.

Is improved air sealing the right choice for you?

According to the Wall Street Journal:

A big factor in the EPA’s cost forecast: successful energy-efficiency programs. These can include steps consumers take, such as more energy-efficient refrigerators, and programs utilities pay for, such as giving companies credits for shifting power use to periods of low demand.

Emphasizing home energy efficiency can be effective in controlling greenhouse gas emissions because reduced demand on utilities to generate electricity should lead to reduced emissions that are a product of electricity generation.

The new EPA rules on greenhouse gas emissions place the burden of compliance on each state, which must develop its own emissions target plan for EPA approval. This will put the states that have invested in renewable and clean energy ahead of others – in particular the states that rely on coal, such as Ohio, Pennsylvania, and West Virginia. Iowa, for example, has invested $10 billion to generate 28% of its electricity from wind.

What do the new EPA rules mean for consumers?

Energy costs the average American household more than $2,000 each year. Those costs are anticipated to rise over the next few years as the new federal rules come into effect. But home energy efficiency can reduce those costs for everyone, whether you own or rent your home.